Past Events and Exhibitions

We've had loads of exhibitions, events, shows and workshops in the past few years - here are few highlights!

Problematic Faves - (August 2017)
Stockton-on-Tees
An exhibition about the phenomenon of having a favourite celebrity but then realising there was something not quite right about them. Because these days, with internet news, Wikipedia and social media meltdowns, it hard to escape the fact that our pop culture heroes are often far from perfect. It doesn’t mean we have to stop liking them, we just don’t have to like all their choices. This exhibition showcased work from Montreal to Liverpool. 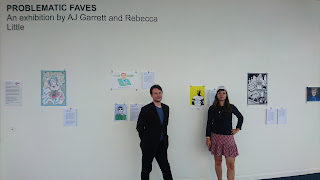 The Spectacular Super-Show (February 2017)
Middlesbrough
An exhibition of work by artists including: Richard Milward, Joanne Taylor, Nuala C. Murphy, Shaun Elliott and AJ+Rebecca - alongside a night of music and dancing, with kissing booth and dressing up! all happening at The House of Blah Blah in Middlesbrough.

Show Offs (August 2016)
Stockton-on-Tees
An exhibition of paintings of clowns and performing animals, created by Peg Powler co-presidents for life AJ and Rebecca.

Art School Express
Birkenhead and Bradford
An entire traditional art degree course condensed into about 7 minutes. A live happening that came to life in the summer of 2015 as part of the Alternative Reality Tour with Josie Long.

Watercolour Challenges
Stockton-on-Tees and Newcastle
A series of workshops about fun times with the world's most relaxing art medium, including several strange optional challenges to shake things up a little bit. These took place at the Star & Shadow in Newcastle and Stockton Weekender festival.

Following the blockbuster exhibition earlier this year, the Kreation of Krazy Kollages Kontinues at Boro Bookworm, this time at the shop's new home in Middlesbrough's historic Forbes Building.

We make collages by photocopying the books in Boro Bookworm, Middlesbrough's only independent bookshop, and mixing cutting and pasting the pictures and words.

IT WAS A MASSIVE LAFF.

The MS Paint Exhibition (May 2012)
ARC, Stockton Art Centre
An exhibition celebrating the most beloved digital arts package of the 90's - showing work from far and wide. The opening night featured vintage laptops for visitors to create their own pictures whilst listening to MS DOS game music.

Laura Simmons Exhibition (April 2012)
Wolstenholme Creative Space, Liverpool
Part of an event for International Record Store day that also includes live bands and a showing of Sound It Out, the film about Stockton's famous record shop featuring several songs penned by Ms Simmons and her band Das Wanderlust. Here is a link for the film, we highly recommend it!

The Clip Art Show (November 2011)
Peg Powler Gallery @ The Green Dragon Studios, Stockton
An exhibition of the drawings featured in office based software programmes since the 1990s, known as ‘Clip Art’. Created by anonymous illustrators to be featured in documents, reports and company bulletins around the world, a generation has now grown up with these images. Familiar yet sometimes strange, this exhibition celebrated this unique genre of pop art and was inspired by the temporary use of the space by Stockton Library Service's Open Technology Centre. A special appearance of Arthur Clip was a great surprise who also presented a free tour of his work, explaining what inspired some of the most iconic pictures of the 90's.

Paperbugs (August-November 2011)
For four extraordinary days in August, Stockton-on-Tees transforms into a vast performance space for both UK and international outdoor arts. We encouraged festival-goers of all ages to take part in capturing the vitality and colourful action of performances from around the globe, using drawing. We then held an exhibition later on in the month to showcase the drawings we recieved by visitors to the festival and performers


The Peg Powler Gallery @ The Green Dragon Studios Exhibition (May-July 2011)
Stockton on Tees
An exhibition featuring drawings created at our past events, featuring drawings by Ollie Hefferman, Nicky Peacock, Lauren Wilson and Bob Fischer. The exhibition was up at the same time as the relocation of the computer facility for Stockton's library, as seen in the picture below.

BAD ART LIVE (July and September 2011)
The Waiting Room, Eaglescliffe and The Black Heart, London
"The Bad Art School" was a special live event that took place on the evening of Sunday July the 3rd at The Waiting Room, Eaglescliffe in support of the mighty Josie Long. AJ and Rebecca were joined by special guests to explore the world of wonky drawing and took part in fast and furious drawing stunts. Josie is an award winning comedian and generally inspiring, funny and brilliant and we also contributed our workshops to the bill of a comedy night Josie hosts and curates at The black Heart in Camden.

A Day in the Museum and A Secret History Walk, The Big Draw 2010
Stockton-on-Tees
In association with The Big Draw 2010 we presented series of drawing events in different venues, all themed around local myths and legends. Quirky history, characters, folklore and stories - from the castles, queens and monsters of the dark ages to strange people and occurrences from of recent times - were all celebrated and explored through drawing. After all of October's events took place, Peg Powler Gallery at Green Dragon Studios presented a Big Draw exhibition in November to showcase everyone's contribution.

Our award winning 2010 events can be found on The Big Draw, Campaign for Drawing Website here. You can also purchase a Drawing Inspiration book featuring our project.

Peg Powler Gallery Presents: ZINE (July 2010)
Middlesbrough
We opened a pop-up shop for a whole month without any funding, and it nearly killed us, but it was such good fun. Our D.I.Y. publishing house and book shop was dedicated to small, photocopied comics, magazines or books aka 'zines'. Featuring zines from Teesside and around the nation, workshops on making zines, and a place to come and work on and publish your own zine about anything you care about - art/football/poetry/animals - anything.